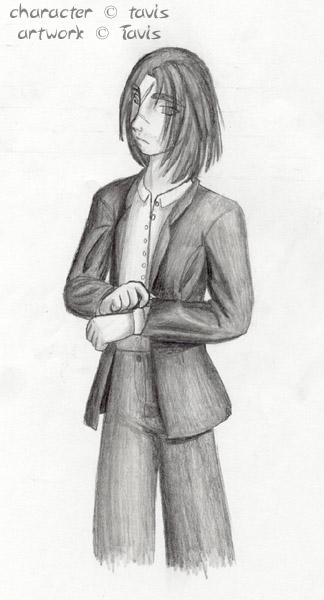 Abilities: Good at knife and fist fighting, Bossing people around, a good endurance, Ability to cope with most things.

Relationship: Is with Tavis. (he's very much Bisexual however)

Likes: To be in control of everything, Being the leader of the group, intimidating and messing with people, acting like an enigma and a tough guy. mead,

Dislikes: Not being in charge, Tavis hiding things from him, Natalie, having far too many bizarre things tossed at him at once and people trying to mess with his eyes.

Personality: He is very much a leader and likes to try to be in that position as often as he can. When something doesn't go his way he typically tries to either manipulate or intimidate (depending on whether he likes them or not) into doing what he want. He is known as a dangerous man and he was leader of a bandit gang. He also likes to hide things about himself from others. The name "Wolf" he adopted because he felt it fit his personality. According to stories wolves are feared, hated, cunning, and good at tracking. He only tells his true name to people he truly trusts.

He does enjoy acting like an enigma at times. Some of the stories that people have made up about him amuse him and get him a lot of respect and fear. He also finds it quite amusing to manipulate people into doing what he wants.

Despite his lifestyle of being a bandit and living off the streets he is a man of his word, when he says he is going to do something than he will do everything in his power to do just that.

Appearance: Wolf is a large and well built man (from the artist Tavis: my earlier style tends to depict him far too thin.) He can intimidate most people by his stature and general temperament.

He has a square jaw, shaggy, shoulder length black hair, a scar over the bridge of his nose and one diagonally between his eyebrows. His left eye has been carved out of his head in a fight and is now replaced with a glass eye. His skin has a slightly dulled gray overtone to it. Like Tavis there are scars all over his body but he keeps most of them covered up.

Background in brief: He lived a good portion of his life on the streets and was around Tavis during the time Tavis joined his rival gang. He managed to kill the leader of the gang Tavis was in but at the cost of his left eye.

After meeting up with Tavis (and all the turmoil and that erupted from that) he is now a member of the group.

Back to Victorian Legends

Back to Tavis' character page