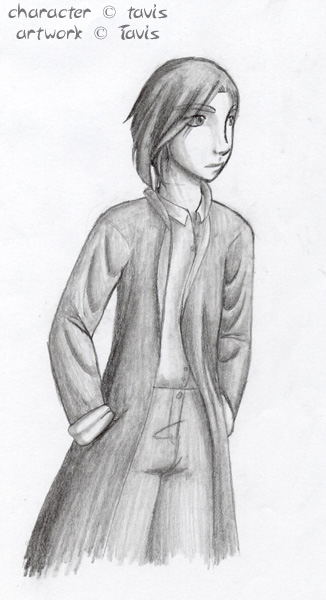 Animal associated with: Chickadee (or other small brown bird)

Pets: Scrap (Yes, Tavis' bird is actually in the game same color and temperament except she is a bit more loyal in game go here to read a bit on her). Shadow, a mutt that he left at Phinnias Belltran's.

Abilities: Knife fighting, running like hell, illusion magic, blending in in a crowd (Lots of RP characters just don't have this ability from what I have seen) typically deals with the black market.

Sexual orientation:  Tavis is very much Bisexual and is currently in a relationship with Wolf.

Likes: Money, shiny things, knives (as long as the blade isn't in him) the thrill of stealing (the getting caught at times part he doesn't like however) warmth, wolf, ranting and watches.

Dislikes: Boats (can't get him anywhere near them) dogs, jail, being stolen from, barghists, any creature that could consider him food (he has no real interest in seeing a dragon because he would be convinced that it would eat him), when he can no longer control his illusions.

Personality: He is typically shy and suspicious of new people and it takes him a while to actually open up to people. when a problem is bothering him he clams up and acts like nothing is wrong. He also is a bit high strung and easy to surprise. When he does get too scared he either faints or turns invisible. Once he actually does open up to a person he tends to rant and rant to you about the things he is keeping inside. (most of his rants end up being funny despite the fact that Tavis is being dead serious about them). He generally avoids people and stays by himself when he gets the opportunity to. He's the type of thief that sneaks into your home or runs "accidentally" into you to take your things not charismatically talk to you and steal it from under your nose.

Appearance: He has fairly standard features, which have served him well in hiding from the police, (So what did the suspect look like? Well.. he had brown hair.. and brown eyes.). His hair Is a light brown and is cut shaggily with the right side of it being the longest part. He also has two scars that are typically visible, one to the  left of his chin and another on the right side of his neck. He is thin from infrequent and few meals he managed to scrounge up day to day while living on the streets but he is also cut from the fights he has been in. He has scars all over his body but most of them he keeps covered up.

His wardrobe often includes a large coat so that he can stuff and hide things, Dirty plain cloths that often aren't in his size. He typically wears unassuming colors if he can find them but will wear what he can get a hold of. 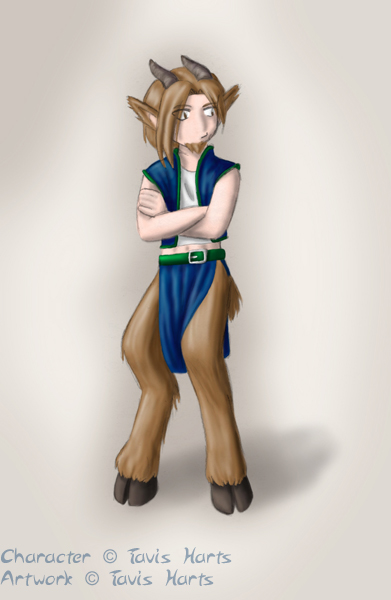 Tavis managed to, while trapped in the land of the fairies get himself turned into a Satyr. (those wonderful half goat people with the large libidos and consume far too much alcohol.)

Horns: there are now two greyish brown horns on his head that start above his hair line and follow across the top of his head pointing a bit up at the very tip.

Face: well he doesn't have a baby face anymore, He now is plagued by a rather cute goatee.

Legs: Yeah.. one of the largest changes that happened to him, (and the one he is most disturbed by) his thighs are the same lenght and still seem to be the same as when he was human except for the fact that they are now covered in fur. The lower part of his legs shrunk a few inches and his feet grew a few inches. The hooves of goats (as well as Tavis') support themselves mostly on two toes that have  large toenails (the hooves) of which all the actual walking takes place. Two of the other toes make themselves noticeable from behind the leg in which they poke out slightly and have a small tube like toenail sticking out behind it. The other toe is still inside the foot. He now technically walks on his tip toes, and because of the size of his feet and how the toes meet the ground he walks with his knees bent (Its easier to keep himself balanced like that).

A decent picture that I have drawn that focuses on the feet is this one:

Fur: Exact same color look and feel as the hair on his head.

Tail: It is covered in shaggy fur and comes out of his body where the tailbone of the human body would end. The tail itself is only about 7 or 8 inches long and barely reaches  very far below his butt. The tail is very expressive and will mimic his emotions exp; wagging when he is happy, Sticking straight up when shocked. (he hasn't much control over his ears or tail so they tend to give a lot of stuff away at the moment)

Ears: He now has almost elf like ears that are furry. The ears have the ability to flick when touched and are highly expressive of his mood. (also not something he is happy about, It's really hard to hide things from people or tell lies when there are two large ears on either side of your head that are flagging your emotions to everyone.)

Background in brief: The earlier part of his life was spent on a pirate ship and needless to say it was less than pleasant (which is why he is timid of people). His father refused to admit to the rest of the crew that he was his son so that Tavis would be put into less danger and wouldn't be used against him., Tavis at times questions whether he was really his father and not simply someone who he was dumped off to. Because of the abuse he suffered on the ship he hates his father with a hatred that will probably never fully go away. The ship finally crashed onto some jagged rocks near shore during the twilight of the morning. Tavis managed to be the only one to survive the crash. Every since then he has been absolutely terrified of ships and tends to avoid large bodies of water if he can at all help it.

After a period of living on the streets and joining and leaving a gang he then found and became friends with Sabin.

back to the main Victorian Legends page

Back to Tavis' character Page